I love a good ghost story, don’t you? So gather around folks and get yourself some tea because I am going to tell you one. It happened  to my mother: we call her Oma. This story got written up in a Bengali magazine and made Oma a minor celebrity. She told it over and over to an expanding circle of fans, right up to the time she died. She was eighty and almost completely blind, by then. The story is called The Apple Pie Ghost.

Oma visited us in America in fall of ’96 from India. We took her on a road trip to California and spent a night in the tiny historic town of Julian, 50 miles northeast of San Diego. Julian is a postcard-pretty town, famous for its apple orchards. There are big pine forests and lovely lakes. We rented a cabin in the woods which we booked through the internet. The cabin looked rustic and comfy in the photos. There was a tree growing out of the floorboards and right through the roof of the front porch! It was so quaint and charming. We paid the owner (a Mrs. Fisher) with a credit card over the phone. She lived in San Diego and we could tell from her voice she was an elderly lady. “The keys are in the bar-b-que inside a coffee can, ” she said. “Put it back in the same place when you leave.”

The cabin was in a dense wooded area, rather difficult to find as the road was overrun with bushes and the marker hardly visible. It was a creaky old thing, badly in need of repair. When the wind blew the entire structure (thanks to the tree growing out of its roof) shuddered and groaned.

We had lunch in town and went for a walk. Mom got worn out and wanted to nap so we dropped her back at the cabin and hubby and me took off to fish in the lake. The sun was just sinking over the treetops when we packed up. We stopped en-route to pick up pizza before heading back to the cabin. When we arrived we found the lights blazing and Oma waiting at the door. She looked wide-eyed and anxious.

“Quick!” she said. “Something happened.”

HERE IS OMA’S VERSION OF WHAT HAPPENED “When I woke up. it was dark. I called out your names wondering if you were back. When I heard no answer, I groped my way to the living room and tried to find the light switch. Something in the living room made me feel terribly uncomfortable– like there was somebody there– a presence of sorts. Thank god I found the switch and turned on the lights. The room empty. I decided to watch some TV so I picked up the remote but when I went to sit in this big blue chair, I felt like somebody was pushing me out! I tried to sit again and I felt once more that violent resistance. It was most odd so I just went and sat down on the sofa. Suddenly I noticed a strong smell  permeating the room. It was cinnamon and apples– the smell of freshly baked apple pie! I opened the oven and peeked inside. The oven was cold and there was nothing there. The windows were closed and there were no other houses around, so the smell could not be coming from outside. I was puzzling over this, when I heard a  scratching on the kitchen screen door and saw a cat yowling outside trying to get in. It was all very bizarre. First that ‘thing’ not letting me sit the blue chair, then the smell of fresh apple pie and now the cat! To calm myself, I closed my eyes and tried to meditate. Next thing I knew you two were back.

Hubby and me did not know what to make of it. (FYI Oma does not believe one iota in ghosts. She’d probably smack a ghost on the nose if she saw one) But given that she was alone in a creaky old cabin in the middle of the dark woods, it was  possible her imagination went a little awry. I told her so.

“It was not my imagination,” she retorted indignantly, “And don’t treat me like an old woman.” So we left it at that.

OMA’S VERSION (continued): “The next day before we headed out to San Diego we stopped downtown for early lunch at this old-fashioned American diner. It had black and white linoleum checkered floors and antique bottles decorated the windows. The waitress was a chatty lady who urged me to try a slice of their famous apple pie. She asked where we were staying. 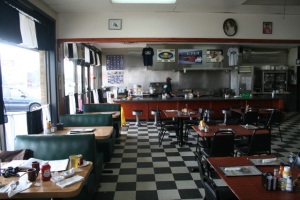 “He died recently, didn’t he ? Mr Fisher?” The waitress asked.

We didn’t personally know them, we told her.

“They were a nice couple,” the waitress continued. “Regulars at this diner.  Mr. Fisher loved our apple pie. He would always take a whole pie home with him.”

(This ends Oma’s version of The Apple Pie Ghost story. Add some twilighty music here if you like!)

As The Apple Pie Ghost made its rounds, Oma’s fan base grew and the story plumped  a little. The night became moonless and foggier, the cabin creakier, a few owl hoots got thrown in and the cat turned into sinister black feline with monstrous yellow eyes. Oma’s  daughter and son-in- law (hubby and yours truly) were described as a rugged. National Geographic type of people with a penchant for extreme adventure who had gone mountaineering (not nature rambling to pick pine cones, ladies and gentleman) leaving a brave old lady alone in the cabin. The brave old lady –who did not know fear, having encountered leopards and tigers in her tea garden days– had just returned from an evening walk (not woken up from a snooze, excuse me). The story got more layered and delicious until it was practically falling off the bone. The audience was drooling. Plenty of tea was drunk in the course of this story and cups lay helter-skelter on the floor. When Oma delivered the punch line (Then the waitress said “Mr. Fisher loved our apple pie. He always took a whole one home with him) – she did it with the élan of a sous chef flipping a large omelette in a very tiny pan–the fans gasped en-masse and a delicious shiver went through the group. Oh yes, Oma knew how to tell her stories. She left her audience reeling.

When I reread the story in the Bengali magazine long after she died, I thought, wait a minute, this is all too pitty-pat, too tidy. I wonder what really happened? By then I had  Oma’s version buzzing in my brain and the real facts of the case had fizzled out. I did not want to be the big killjoy and add a spoiler:  after all, The Apple Pie Ghost was Oma’s path to stardom– it made her a celebrity. All her audience really wanted was the razzle-dazzle of a magic show, not a deconstruction of the sets backstage.  But I had to find out, just to satisfy my own curiosity.

So I consulted my hubby who, if you must know, is not prone to wild imaginings like the womenfolks in my family. Here are bones of the story as verified by him.

Oma was left alone in the cabin (TRUE). She felt uneasy for some reason (TRUE). When we returned she told us about the apple pie smell and the cat at the door (TRUE).

(Flash forward to the diner scene, if you will.)

The waitress mentioned Mr. Fisher had just died (TRUE). The Fishers were regulars at the diner (TRUE). The diner was famous for its apple pie (TRUE)

(Now here is the dubious bit).

If mom was alive she would kill me for botching The Apple Pie Ghost. Now why would I want to do that? Why would I trade so much joy, so much tea, such sweet bonhomie and such shivers of excitement for few grains of truth? Oh pleeze….

So cozy up folks, let’s get ourselves some tea and let’s share stories. Have you ever stretched truth into fiction? Please take me with you. I will happily suspend disbelief and sign up for the ride.

If you like tea, ghosts and stories you may like my upcoming novel Teatime for the Firefly. You can read more about it HERE.  I am represented by April Eberhardt Literary.